We are just back from spending three and a half weeks in India and Nepal and it has been good to experience once more the highs and lows of travelling. In their different ways – and they have been very different – India and Nepal have been exciting, eye opening, challenging and rewarding. We experienced a fair degree of culture shock, though overall much less than I had expected and more than counterbalanced by the many positive experiences.

The warmth and friendliness of the people we met has been outstanding. Apart from our time with our son and his partner – which was of course was a real treat and the initial motivation for our trip – we spent very little time with westerners and a lot with local people who welcomed us into their lives. All our hosts made us feel at home, and in particular Vinita and Pradesh in Delhi and Biju, Aayusha and Nirusha in Panauti, who have become friends. Then there were the friends of friends – Antara and Saurabh in India and Julia in Nepal who gave up their valuable time to show us round, respectively, the dargah of Nizamuddin, the Taj Mahal and the courtyards of Patan.

On top of that we met many very special people, often quite unexpectedly – Baiku and Bai who invited two total strangers to their home in Kathmandu; Julia’s brother who shared his profound knowledge and enthusiasm for Newari culture; Bikal who went out of his way to bring us a pair of glasses we had left in Panauti and who spoke eloquently about the Community Homestay project; the principal of the government school in Bhital who shared his inspirational hopes for education; the poet Pushkar, the sarod player Suresh and the tuk-tuk driver in Agra who commented that if you show people respect you are likely to gain respect in turn. It was a privilege to meet them all. 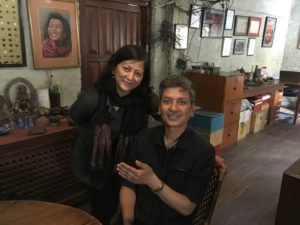 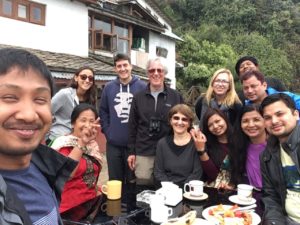 The architectural and natural beauty of the two countries was breathtaking. The Taj Mahal really was as good as we had hoped – a quite staggering achievement. But then so were the Qutub Minar, the carvings in the royal palace of Patan, the gorgeous gardens of Humuyum’s tomb, and the local treasures of Green Park in Delhi and Panauti.

Then all this fell sharply into perspective when we woke one morning to watch the first rays of the sun fall on the Annapurna mountains. And some of the birdlife has been every bit as
beautiful – the sparkling blue of the verditer flycatcher, the vibrant purple of the delightful sunbirds or the brilliant red of the long-tailed minavets.

The food was excellent, and we have never been anywhere before that was as easy for vegetarians. All our hosts provided local breakfasts – the aloo parathas in Delhi were particularly special – and several offered delicious home cooking in the evening as well – Biju went as far as to teach us how to cook potato curry and chapatis. When that was not available good restaurants were not far away, notably in New Delhi and Pokhara.

Musically our trip was rewarding also. On our first evening Antara took us to hear Sufi music in the dargah (shrine) of Nizamuddin. The music was magical. A couple of days later in the Sikh temple Sis Ganj in Old Delhi, we sat again enthralled by sacred music. I was asked to sing as well, firstly by our hosts in Delhi, and Panauti. And in Patan we joined sarod player Suresh Raj Bajracharya, who was practising the Sarod in Julia’s gallery, with his student, a former living goddess. They played ragas and I sang Rainbow – I have never sung to a divinity before!

I could go on – about the colours, the sounds, the packed streets, the contrasts and the surprises – but I’ll spare you all that, for now at least. Our travels seem to have had a positive impact on my creativity – I am at long last emerging from a long period of songwriting drought and a new song is working its way into the light. Thankyou, India and Nepal.

Here is Suresh playing the Sarod: