Paco de Lucia, one of the finest flamenco guitarists, died today at the all-too-young age of 66. He will be greatly missed – guitarists of his calibre and influence do not come along every day. Here is a recording of him with singer Camarón de la Isla, playing a siguiryas in a small and presumably smoky club. Fabulous guitar and some of the most passionate singing you could ever hear.

I first encountered Camarón’s music in 1983 – we were staying in Nerja on the Andalucian Mediterranean coast and the family who ran a local bar also became a flamenco troupe in the evening. The daughter and lead singer was a passionate fan of Camarón and each night she more or less worked through his seminal album, La leyenda del tiempo.

I tracked down a copy of the album and from there sprang my love of flamenco music. On  La leyenda del tiempo Camarón, accompanied by the young guitarist Tomatito, combined flamenco with rock and jazz. The record has been described by Flamenco World as ‘a turning point, one that by breaking up preconceived ideas changed our concept of flamenco music’. It was one of the first flamenco discs to feature electric guitar, bass and synthesiser.

Much of Camarón’s earlier work was, though, with Paco de Lucia. Under Franco, flamenco had been co-opted to support the dictator’s stifling views of traditional Spain. As the country began to emerge from fascism, Camarón and Paco helped restate flamenco as a vibrant, sensual music and to re-establish it as a major art form. Camarón also sang some of the poems of Federico Garcia Lorca, one of the many victims of Franco. Aged just 42, and ravaged by cigarettes and heroin, Camarón died of lung cancer in 1992.

Flamenco is made up of a number of palos or styles of which the siguiryas is the darkest – the cante jondo at its most profound. As with many flamenco palos, the siguiryas has a compas of 12 beats, counted 1 and 2 and 3 and a 4 and a 5 and… Other 12-beat palos include the wonderful soleares and the much more upbeat bulerías. Here is a link to another piece by Camarón and Paco de Lucia, this time por bulerías. 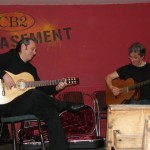 By coincidence, we also today had the visit of our friend, Miguel, also a fine guitarist and with whom I have had the great fortune to play and record. Miguel grew up in Seville where he lived close to and got to know Ricardo Pachón, who had worked closely with Camarón and had produced La leyenda del tiempo. Here is Miguel’s wonderful playing on Sirocco, which is set to the rumba flamenca rhythm.

I’ve prepared a new video of October Wind which is available here:

The song is the next single from my album ‘The dust of time’ and you can download it here:

I wrote the song after a chance encounter by Grantchester mill, just outside Cambridge, and much of the video is filmed there, together with some footage from my last concert at Cambridge Folk Club. Rhys Wilson produced the song.