Retired policeman: ‘How do you find our country now?’
Zoe: ‘It’s not “our” country, but my country – you were with the Nazis.’

In the days and weeks leading up to the Athens Olympics in 2004 Greece was filled with bands of wandering journalists waiting for the games to start and searching out other stories to fill their time. Daniel Vernet of Le Monde was one of them and he met Zoe Kaltaki, who had fought in the resistance against the nazis in the Kilkis mountains to the north of Thessaloniki. Her story somehow summed up the turbulent twentieth century, and inspired me to write ‘Thesalonika’ – we played the song again recently at Cambridge Folk Club, and there is a video of it here:

At age 12, Zoe followed her father into the resistance. She refused to lay down her gun after the liberation, and joined the communists who were fighting the right (who were supported by the English and Americans, worried that Greece might follow other Balkan countries into soviet Russia’s influence). She was injured several times and ended up in a hospital in Sofia, Bulgaria. A million people were displaced by the civil war, and 100,000 found exile in Eastern Europe. Zoe herself found a new home in Czechoslovakia, where she made paper flowers for funeral wreaths, married another Greek exile and had four children.

Zoe returned to Greece in 1982 after an official amnesty, to live in Volos with her daughter Olga. Asked whether she regretted her return to her country,

she summed up her mixed feelings by saying ‘Wherever I feel at home, that is my country’. Olga added that in Czechoslovakia ‘I didn’t know what stress was. There you just had to work – here you have to fight.’ Zoe had returned several times to the Kilkis mountains, and on one of these visits met an old acquaintance, the retired policeman quoted earlier.

Thessaloniki is a remarkable city.

It was home to many of the sephardic jews expelled from Spain in 1492. For several centuries under the Ottoman empire it was one of the great European multicultural cities, home not just to the Jews and Greeks, but also to many Muslims, including the family of one of our friends. As late as 1912 Thessaloniki was 40% Jewish, 30% Greek orthodox and 25% Muslim.

However, following the end of the empire

and the population exchange of 1923 when some 1.5 million people in the region were forcibly uprooted, all the Thesalonican Muslims were expelled, and 100,000 refugees arrived in the city from Turkey. Twenty years later the Nazi occupiers deported 95% of the the city’s jews to Auschwitz in 1943 – the majority died in gas chambers within hours of their arrival.  By 1945 the population was almost entirely Greek.

We visited Thessaloniki in 2007 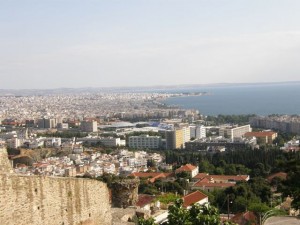 and I even managed to borrow a bazouki to play the song in a restaurant in the market. The city never seemed to sleep – the bars along the waterfront were throbbing with music into the small hours. Although a very modern city, it still drips with history – across the bay is Mount Olympus, home of the gods of ancient Greece, and inland is the cave where Aristotle taught the young Alexander the Great. 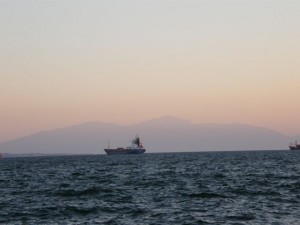 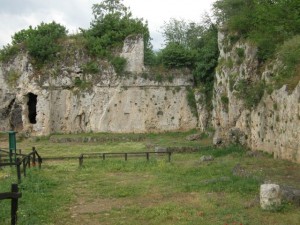 Thessaloniki is some way from the mass tourist attractions of Greece, and in consequence people seemed delighted, even surprised, that we had made the effort to visit. In the countryside outside the city people stopped and insisted on giving us lifts. The curator of the Aristotle school called us a taxi and ensured that we were given a private tour of a Macedonian tomb on our way to the station. On the bus to the airport on our day of departure we were even given presents by our fellow passengers, who included a retired teacher of French from the university.

‘Thesalonika’ is about home and exile, about how what binds us together as Europeans and as people is more important than what separates us, and two years ago I had the privilege of singing the song with a French choir in a Welsh chapel.

While in Greece we also visited Volos without realising that it was Zoe’s new home. I would have liked to to meet her and play her her song. Above all, I would have liked her to know that her story had touched a chord with people across the continent.

Where can I go?
Where can I call home?
Oh, my Thesalonika
Where are you now?

If anyone reading this blog can share it with her or her family, please do – and thankyou, Zoe, for the inspiration.

The exchange and the civil war is captured memorably in Theo Angelopoulis’s film The weeping meadow.

A 2010 Europa project Thessaloniki and the European memory explored the memory of the population exchange and the holocaust in Thessaloniki, and you can download their short and highly readable report. The authors are historians Sheer Ganor, Constanze Kolbe, Ozgur Yildrim and Sára Zorándy.

Finally, Victoria Hislop’s novel The thread is set in the city from 1923.