December 5th 2022 saw the start of a very cold fortnight in Cambridge. Temperatures rarely rose above zero, and fell to -11.3C early in the morning of the 15th; 10+cm of snow fell in the night of the 11th and stayed until the 19th. Ponds and lakes froze, and even the Cam had started to ice up by the 18th.

The lake in Hobson’s Park across the railway line was no exception. However the springs in Nine Wells continued to flow, and indeed on the coldest morning a misty steam rose from Hobson’s Brook. The area rapidly attracted the waterbirds that were displaced from the lake. 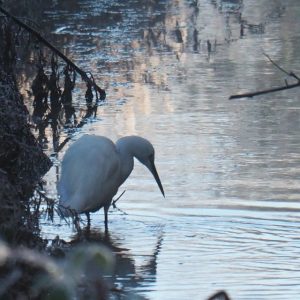 Snipe have always been occasional visitors but following the snowfall I counted five around Nine Wells and along the brook and nearby hedges. Little egret (right) and grey heron, more regular visitors, also appeared. Two new species to the site were more surprising: a couple of teal in the springs, while a family of five barnacle geese sought food in areas of the stubble field where the snow as less deep.

Other winter visitors flocked to the area – up to 200 redwing (below left and centre) thronged the hedgerows and shrubby areas, growing less timid as the cold spell wore on. This is more than I normally record around the site and more than were present immediately before of after the freeze began – it is possible that they were drawn by the presence of water, which may also have made adjoining areas slightly less cold. Good numbers of fieldfare (below right) were also present. 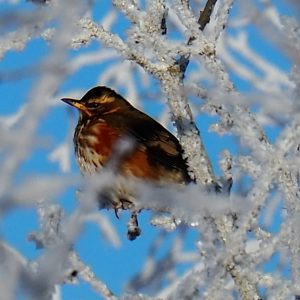 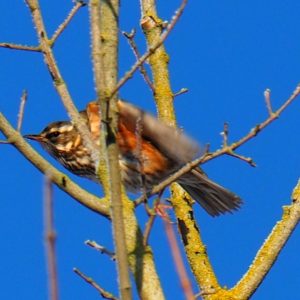 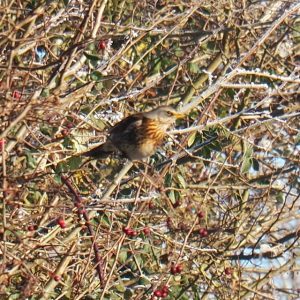 And one more treat lay in store on the 15th: another new species for the area, lesser redpoll, which called from one of the bushes along the brook.

For more about my study of the wildlife in the fields around Nine Wells, see my book A haven for farmland birds.