My new album ‘Never enough’ is now well and truly launched and has been getting some radio play. I’ve had some nice comments from reviewers: ‘Really thought-provoking and interesting songs’ (Genevieve Tudor, BBC Radio Shropshire).‘There is some beautiful writing on Never enough‘ (Greg Russell, BBC Radio Sheffield). ‘Never enough is possibly John Meed’s finest work, finding him totally in control of his palette of words and ideas’ (Les Ray, Unicorn). ‘John Meed has created something that is at once highly engaging and equally thought-provoking’ (Allan Wilkinson, Northern Sky). ‘The rewards are worth the reaping’ (Mike Davies, FATEA).

I’m grateful to everyone who came to the launch at CB2 earlier in November – you created a lovely atmosphere. If you missed it, or would like to repeat the experience, we will be doing much the same set at the Cambridge Folk Club on January 25th. The club meets in the The Golden Hind, 355 Milton Road, Cambridge CB4 1SP – the evening starts at 8pm and we shall be on at around 10pm. I’ll be joined by Rhys on guitars, Andy on bass, Matt on violin and Lucinda on viola. Tickets here.

You can listen to or download the songs, or order the CD, here:

There is a live video of the title track (with Matt and Lucinda) in the lovely Suffolk church of Felsham here:

There is also a live version of Blackbirds here:

As it’s getting to the end of the year, here is some of the other music I have been enjoying this year. My album of the year has been Low’s ‘Double negative’ though you need to be able to cope with doses of distortion – all apparently a reaction to living in Trump’s America. It’s worth persisting, though.
It’s also well worth trying:
– Nenah Cherry’s ‘Broken Politics’ and its standout track ‘Kong’
– Ed Harcourt’s piano pieces on ‘Beyond the end’ including the lovely ‘Duet for ghosts’
– Phoebe Bridgers’ ’Stranger in the Alps’ – try ‘Motion sickness’
And if you feel like venturing away from the English language, try Catalan singer Joanjo Bosk’s Albera.
My favourite new film of the year – by some way – was ‘Shoplifters’ by Japanese director Hirokazu Kore-eda.
Finally, can I take the chance to thank you all for your support, and to wish you all the best for the year to come.

We have now launched the new album, ‘Never enough’. Rhys’s production skills have gone from strength to strength, and it is sounding good. 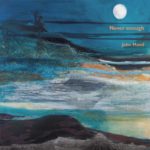 The track listing is:

1 Side by side
2 Never enough
3 La Fayette
4 Strange thing
5 Why?
6 Blackbirds
7 For granted
8 Mistakes
9 Bordeaux

There are some fabulous contributions from other lovely musicians – Rhys of course but also Matt Kelly and Lucinda Fudge on strings, Myke Clifford on sax, Dawn Loombe on accordion and Brian Harvey on bass. I’m grateful to them all.

And the artwork for the cover is from our good friend and wonderful artist, Gail de Cordova.

Here’s the video of the first track on the album:

It was filmed in and around St Pancras station, Gare du nord, Gare de l’est and Gare de Lyon. I’m grateful to the SNCF and St Pancras for the publicly available pianos – the grand at the Gare de Lyon is especially wonderful. And I’m even more grateful to the people of Paris and London for going around their daily travels and inadvertently (and in one lovely moment a the end of Verse 1, advertently) participating in the film, and for proving that what makes us different makes us shine.

I will have copies with me at gigs but both the CD and album download are available from my Bandcamp page and on iTunes etc. You can also listen to the tracks here: