For the last eight years I have surveyed breeding populations of farmland birds on a square kilometre of green belt south of Addenbrooke’s Hospital in Cambridge, to assess the levels of the biodiversity of an area close to the city.

Over the eight years I have in total recorded 90 bird species. These include 17 of the 18 farmland bird indicator species for the Sustainable Development Strategy, of which 13 are breeding, and 18 red list species of high conservation concern, of which 10 have bred.

My most recent survey of the area – which you can download below – showed exceptional numbers of grey partridge in the autumn (right) and corn bunting (above), as well as good numbers of skylark (below left), linnet and yellowhammer (below centre). Yellow wagtail (below right) also breed. Grey partridge declined by 92% between 1970 and 2013 and corn bunting by 89% while yellow wagtail declined by 67%, skylark by 59%, yellowhammer by 56% and  linnet by 55%. 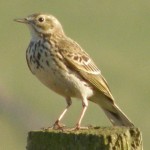 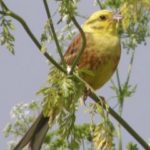 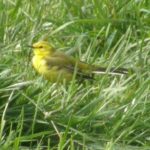 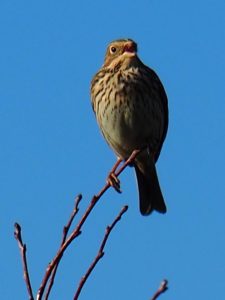 Corn buntings also did particularly well in 2019, with 10 pairs. This is an important population – there are just 11,000 birds in the UK and its recent extinction in Ireland risks being repeated in large parts of Britain if its breeding sites are not protected. The RSPB’s nearby Hope Farm had 2 pairs in 2016 in 1.8km2.

In addition, the site supports a thriving population of water voles, both in the start of Hobsons Brook, and in the ditch that runs alongside the cycle path. 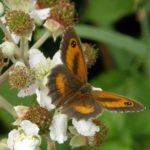 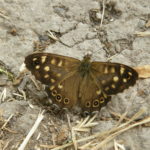 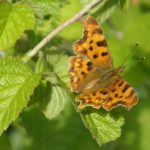 You can download a copy of my most recent report (2019) here: