When the Scottish explorer John Rae was posted by the Hudson’s Bay Company to arctic Canada, he very quickly recognised just how much he had to learn from the Cree and Inuit peoples about traveling and surviving in the hostile climate he would face. When Rae was tasked with finding what had happened to Lord Franklin’s expedition to the Northwest Passage, his trust in and respect for the local people led him to accept their account of the expedition’s fate, which he repeated in his own report. In so doing, Rae drew condemnation from the British establishment – including Charles Dickens, who found it unimaginable that Rae had ‘failed’ to make the 10-12 day trek across the Arctic wastes to verify the story of ‘mere natives’. 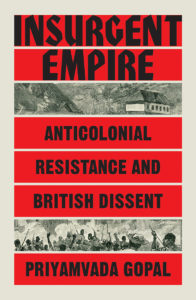 So it did not come as a total surprise to me to read – in the second chapter of Priyamvada Gopal’s excellent book Insurgent Empire – that Dickens had sided with the English governor, Eyre, who had ordered a brutal repression of demonstrators and the murder of a local politician in the Jamaican uprising of 1865 . It did, though, come as some shock that a number of other supposedly progressive Victorians – including John Ruskin – had also supported Eyre. And by contrast, the Positivist thinkers Congreve and Harrison, bêtes noires of my university days, had taken the side of the anti-colonialists. The first part of Priya’s book shows how – when it comes to the Empire and colonisation – our Victorian ancestors were not always what we might expect.

I met Priya through political activism. We were both involved in Campeace, an anti-war movement, around the time of the invasions of Afghanistan and Iraq, and later in supporting the student protests in 2010-11. I have always been impressed by the balanced, thoughtful way in which she speaks, and the courage with which she stands up for what she believes. I take any opportunity I can to hear her talk in and around the university. I am proud to call her a friend and mentor, and had been awaiting the publication of Insurgent Empire with some anticipation.

Insurgent Empire focuses on specific moments of rebellion against British colonialism, and so John Rae does not feature in its pages. However, it is interesting that Wilfrid Blunt, the focus of Chapter 3, also saw himself as a student of a colonised people, in this case the Egyptians involved in the upraising of 1882. And this is the first key lesson of the book – that there was very much a two-way interchange between insurgents in the colonies and radicals in Britain – that terms like ‘liberty’ were not ‘gifted’ to the colonised, but forged in dialogue and eventually taken in struggle: indeed ‘the resistance of the periphery helped radicalise sections of the metropole’ and ‘ideas of freedom’ distinct from those of the free market economy were able to ‘make their claims heard’ (p448).

The second key lesson of Insurgent Empire is to challenge the extent to which people are obliged to accept the conventional wisdom of their time. Wilfrid Blunt is just one of a series of fascinating characters who came to see that behind the prevailing image of a benevolent empire lay an altogether different picture of aggressive self-interest and oppression. These people were able to unlearn the accepted view of empire – Blunt would eventually comment on how Britons were expected to ‘fall down as a nation and worship our own golden image in a splendid record of heroic deeds and noble impulses’. Others would go further and argue – perhaps a third key lesson – that British working people had more in common with those oppressed in the colonies than with their own ruling classes.

As Insurgent Empire moves into the twentieth century there is a change of focus. While many of the nineteenth century activists were British people who traveled to the colonies, recognised what was really happening, and fed this in to the debates at home, as the twentieth century unfolded activists from the colonies such as the Trinidadians C L R James and George Padmore increasingly came to London and became involved in – and often leading lights in – the struggle against colonialism. Priya’s characters, as she comments in the interview below, recognised their ‘moral responsibility’ to ally themselves with ‘those who are at the receiving end of inequality, exploitation and violence’.

Empire was built on the dehumanisation of subject people. In the more extreme view they were regarded as inferior ‘races’; to the more liberal they were ‘backward’ people who needed tutoring by their colonial masters until they were ready to graciously receive independence. As I was growing up in the 1950s and 60s such views still permeated the wider culture (less so, fortunately, my own family), maps of the world still proudly showed British ‘possessions’ in pink, and I am conscious that I still have to work through the remnants of this personal legacy. Insurgent Empire ends with the ‘Mau Mau’ uprising in Kenya and that country’s eventual independence – an event I can remember and a salutory reminder of just how recently the colonies achieved independence.

Priya creates a highly original style of history writing. She interweaves brief but engaging – if often horrific – outlines of the rebellions and the oppression that inevitably followed with the human stories of those who were moved, challenged and radicalised by them. In the process we learn more both about the events themselves, and the lessons they may hold for us today.

Insurgent Empire makes an important contribution to understanding the British colonial past. At a time when myths of empire once more weigh upon current events – from curriculum design to the UK’s relationship with Europe – it becomes ever more pressing to imagine new ways in which we can learn from the past, separate myth from reality and find responses more helpful than pride or embarrassment. We need to recognise both the realities of imperialism – and how fundamentally it helped to create the current world order – and the ways in which resistance in the colonies and in Britain interacted and helped to challenge the imperial project. Insurgent Empire offers some crucial pointers about how we – as activists, educators or citizens – can do this.

You can read about how I came across John Rae in this blog entry. and the song he inspired is here.