We’ve just got back from a lovely weekend in Hopedale, in the heart of the Peak District. I played a couple of short sets on the Saturday night in Alstonefield Village Hall, supporting Flossie Malavialle,

and then on Sunday lunchtime we joined the session in the Royal Oak in Wetton. In between times we managed to climb Baley Hill, walk along the River Dove, and get drenched – twice.

We first met Dave Littlehales – who organises the events in the village hall – and his wife Val just over four years ago. We were staying in a local bed and breakfast and had gone to the rather fine Watts Russell Arms for a meal in the evening, when we overheard someone talking about the Cambridge Folk Festival. When we said we were from Cambridge and musicians, instruments appeared as if by magic and an impromptu session ensued.

Dave and Val have since become good friends, and have introduced us to members of Dave’s group, the Festival Ceilidh Band, as well as to numerous inhabitants of Hopedale and Alstonefield. We have been made most welcome in one of the most beautiful corners of England – and will be back very soon! 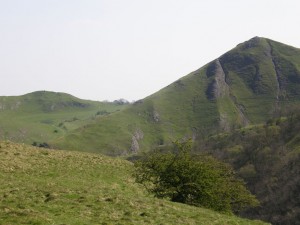 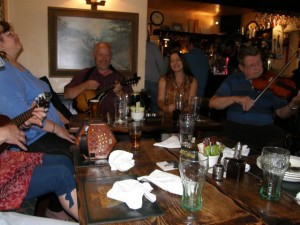 And the reviews? ‘What could be nicer than supper at the village hall? Well, obviously, supper with entertainments and on Saturday, 7th July, on a balmy if somewhat damp evening, we were treated not just to pie, peas and strawberries but also to an evening of musical delight. Excellently supported by John Meed, Flossie Malavialle, the girl from Nimes who became that woman from Darlington, treated us to an evening that was simultaneously très bien and proper mint like.’ (Rob Handscombe, on the Alstonefield website)

‘Then we come to the music. The support was John Meed, a singer/songwriter from Cambridge who did a short spot in each half. His songs were all quite different from each other, and very entertaining. I especially liked Don’t Blame it on Belper. He was an utterly charming man and I hope to get the opportunity to see him again. The main guest was Flossie Mallaville whom we have seen before, I think we first saw her at Maghull in 2002 when Colum Sands invited her up in his set to do a song and then at the same festival in 2003 when we saw her do a whole set. I remember being amazed by her voice then, I am even more amazed now by both her voice and her humour. I genuinely enjoyed everything she did. Best value night out anywhere at £12 a ticket.’ (Wally and Lorna Davies who edit the local folk newsletter) 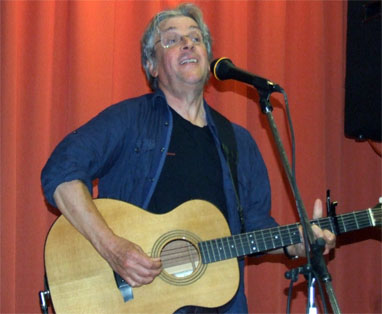