On Saturday I was invited to play ‘Poussière d’étoiles’, the French version of ‘Rocks and stones’, at the vernissage (opening) of an exhibition of Charly Devarennes’s work in Collioure. The invitation came from Charly’s daughters, Dominique and Delphine, who had organised the exhibition just over two years after he died.

We first met Charly about 15 years ago on the beach in Collioure. We had taken to going there in the early evening when the tourists had gone home and the light was at its very best, to swim and to talk with friends. Each time that Charly swam he would emerge from the sea with a particularly attractive pebble. One evening he remarked that the stone he was carrying was ‘poussière d’étoiles’ – and after a moment he added ‘just like us’. 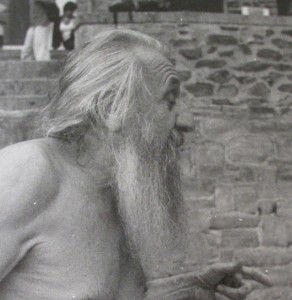 From there came the song, in which I tried to capture a little of the philosophy of this remarkable man.

Charly was born in 1928 in Chaumont in the Haute-Marne in the champagne region of North-East France, and he began work in the family painting and decorating business. He moved to Collioure in 1968 to devote more time to his art, though he continued to work as a decorator and also looked after a vineyard, earning himself the title of a ‘peintre paysan’.

Charly’s life was tumultuous. As one of five brothers (who he referred to as ‘les frères ennemis’) he felt alone in his love for art and his disdain for material things. His first marriage ended in tragedy – he returned home from work one day to find that his wife had died of a brain haemorrhage. His second marriage, after he had moved to Collioure, ended in heartbreak and divorce. He drank heavily and suffered from depression. He had long contemplated suicide before he eventually jumped from the cliffs near to Collioure on August 30 2010.

But Charly was for me an inspiration. He had a sense of wonder at the natural world, a delight in ideas, a distrust of authority and an openness towards others. Not that he was the easiest man to understand, especially to someone whose first language was not French 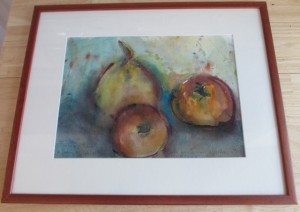 – he described himself as a ‘windmill of words’ and I eventually learned to ask him to repeat things to make sure I had not lost the sense of his comments. But human contact was easy with him. When I first played him the song I had written for him he was moved to tears, and the following day came to the beach with a beautiful still life which he insisted we took as a thankyou.

The Vernissage was a moving occasion. Playing the song to some 200 people, surrounded by Charly’s paintings and faces charged with emotion, was a challenge. There’s a video of the song here, and a lovely article here about the event from the local paper, l’Independent.

Afterwards, people shared their tales of Charly with me. Charly’s friend Gerard turning up on his first Honda 750 motorbike and offering to tow Charly’s broken-down Citroën Ami 6 into town – ‘It had never travelled so fast before’. Charly rigging his small boat with an old sheet when the motor had broken down yet again, sailing triumphantly to Argelès, only to find that the boat could not tack back against the wind. Charly dancing around his vineyard during the vendanges, or talking to the seagulls. Charly refusing to sell a painting to someone he didn’t like, or refusing money from someone he valued.

And Charly says these rocks and stones have stories they could tell us
If only we would take the time to listen.
But aren’t we just like rocks and stones, packed so tight, yet so alone
We hope someone will watch us glisten.

Thankyou, Charly. And thankyou Dominique and Delphine for having invited us and made us so welcome, and for the beautiful picture you gave us.

The exhibition continues in the ancienne mairie of Collioure until October 20th.

6 thoughts on “Charly Devarennes – powder of the stars”