When the Scottish explorer John Rae was posted by the Hudson’s Bay Company to arctic Canada, he very quickly recognised just how much he had to learn from the Cree and Inuit peoples about traveling and surviving in the hostile climate he would face. When Rae was tasked with finding what had happened to Lord Franklin’s expedition to find the Northwest Passage, his trust in and respect for the local people led him to accept their account of the expedition’s fate, which he repeated in his own report. In so doing, Rae drew condemnation from the British establishment – including Charles Dickens, who found it unimaginable that Rae had ‘failed’ to make the 10-12 day trek across the Arctic wastes to verify the story of ‘mere natives’.

So it did not come as a total surprise to me to read – in the second chapter of Priyamvada Gopal’s excellent book Insurgent Empire – that in the Jamaican uprising of 1865 Dickens had sided with the English governor, Eyre, who had ordered a brutal repression of demonstrators and the murder of a local politician. It did, though, come as some shock that a number of other supposedly progressive Victorians – including John Ruskin – had also supported Eyre. And by contrast, the Positivist thinkers Congreve and Harrison, bêtes noires of my university days, had taken the side of the anti-colonialists. The first part of Priya’s book shows how – when it comes to the Empire and colonisation – our Victorian ancestors were not always what we might expect.

I first met Priya through political activism. We were both involved in Campeace, an anti-war movement, at the time (if my memory serves me well) of the invasions of Afghanistan and Iraq, and later in supporting the student protests in 2010-11. I have always been impressed by the balanced, thoughtful way in which she speaks, and seize any opportunity I can to hear her talk in and around the university. I am proud to call her a friend and mentor, and had been awaiting the publication of Insurgent Empire with some anticipation.

Insurgent Empire focuses on specific moments of rebellion against British colonialism, and so John Rae does not feature in its pages. However, it is interesting that Wilfrid Blunt, the focus of Chapter 3, also saw himself as a student of a colonised people, in this case the Egyptians involved in the upraising of 1882. And this is the first key lesson of the book – that there was very much a two-way interchange between insurgents in the colonies and radicals in Britain – that terms like ‘liberty’ were not ‘gifted’ to the colonised, but forged in dialogue and eventually taken in struggle: indeed ‘the resistance of the periphery helped radicalise sections of the metropole’ and ‘ideas of freedom’ distinct from those of the free market economy were able to ‘make their claims heard’ (p448).

The second key lesson of Insurgent Empire is to challenge the extent to which people are obliged to accept the conventional wisdom of their time. Wilfrid Blunt is just one of a series of fascinating characters who came to see that behind the prevailing image of a benevolent empire lay an altogether different picture of aggressive self-interest and oppression. These people were able to unlearn the accepted view of empire – Blunt would eventually comment on how Britons were expected to ‘fall down as a nation and worship our own golden image in a splendid record of heroic deeds and noble impulses’. Others would go further and argue – perhaps a third key lesson – that British working people had more in common with those oppressed in the colonies than with their own ruling classes.

As Insurgent Empire moves into the twentieth century there is a change of focus. While many of the nineteenth century activists were British people who travelled to the colonies, recognised what was really happening, and fed this in to the debates at home, as the twentieth century unfolded activists from the colonies such as the Trinidadians C L R James and George Padmore increasingly came to London and became involved in – and often leading lights in – the struggle against colonialism. Priya’s characters, as she comments in the interview below, recognised their ‘moral responsibility’ to ally themselves with ‘those who are at the receiving end of inequality, exploitation and violence’.

Priya creates a highly original style of history writing – she interweaves brief but nonetheless gripping outlines of the rebellions and the oppression that inevitably followed with the human stories of those who were moved, challenged and radicalised by them. In the process we learn more both about the events themselves, and the lessons they may hold for us today.

Insurgent Empire makes an important contribution to understanding the British colonial past. At a time when myths of empire once more weigh upon current events – from curriculum design to the UK’s relationship with Europe – it becomes ever more pressing to imagine new ways in which we can learn from the past, separate myth from reality and move beyond feelings of pride or shame. We need to recognise both the realities of imperialism – and how fundamentally it helped to create the current world order – and the ways in which resistance in the colonies and in Britain interacted and helped to challenge the imperial project. Insurgent Empire offers some crucial pointers about how we – as activists, educators or citizens – can do this.

‘I’d never learned how to talk to people who weren’t like us – people who went to school and visited the doctor. Who weren’t preparing, every day, for the End of the World’.

There are many things I love about being a singer-songwriter – notably the rush of creativity when a new song comes, or the buzz after a concert that goes particularly well. But it also means that you meet some fascinating people.

I first met Tara Westover at our local music club in CB2, Cambridge, some five years ago, when she was completing her PhD at the university – shortly after, I now realise, one of the most difficult periods of her life. She rather unwisely offered to sing harmonies on some of my songs, an offer I could hardly refuse as she has one of the finest voices I have had the privilege to work with. We have since played many gigs together, and she has collaborated on my last two albums.

In quiet times during rehearsals, or on the way to or from concerts, she would tell me many tales from her astonishing and highly unusual childhood – growing up in a Mormon community in Idaho, in a survivalist family dominated by a charismatic but flawed father who spent his time – when not placing the family in mortal danger in his scrapyard – preparing for the end of the world. 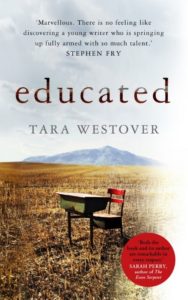 But this could hardly prepare me for reading her remarkable memoir, Educated, published on February 20th by Hutchinson (in the UK – Random House in the US). The first part of the book describes Tara’s childhood and adolescence in the family home nestled under the mountain they called the Princess. To describe the family as ‘survivalist’ is somewhat misleading, as how Tara and her siblings survived their childhood is itself a miracle , confronted as they were by a succession of car crashes and workplace accidents, a refusal to counter any healthcare or medication beyond mother’s herbal remedies, a violent brother and non-existent ‘home schooling’.

There is one particularly stark moment when Tara finds her brother lying on the road side following a motorbike crash. He has suffered his third major head wound (the first two have left him a changed person), but when she phones her father he tells her to bring him home so that their mother can administer a few herbs. It’s an odd world where teenage rebellion takes the form of driving your brother to hospital.

It would be easy to conclude that Tara paints a bleak picture of her family. In fact she remains remarkably honest throughout. She is still able to talk of her love for her parents, to capture the wild beauty of her childhood home, and to paint a portrait of her father that is tremendously human, where his humour, his enthusiasm and his pride in Tara’s singing shine through his probably bi-polar delusions and paranoia. In the end she likens him to Don Quixote, a ‘zealous knight’ tilting at windmills, to whose warnings of doom ‘no one listened. They went about their lives in the summer sun.’

The second and third parts of the book describe the process through which Tara found her way into education, sought to come to terms with the wider world, and eventually gained a doctorate from Cambridge University. It’s a journey of both remarkable achievement but also some personal cost. At each step along the way she has faced a regular ‘twitch upon the thread’, as Waugh put it, from her home and family.

We all bear the scars of growing up, and spend much of our adult lives coming to terms with them. Educated is often a tough read, and it was painful to hear a good friend describe with such honesty how she responded to her brother’s abuse, her parents’ rejection, or the resulting family schism. It is also very moving indeed.

But above all, it’s a tremendous read and Tara has a real talent as a story teller – I found it very hard to put down. Here is a link to Tara’s website. You can order Educated from Heffers/Blackwells or, if you must, from Amazon.

Here are Tara and I performing Thessalonika at Cambridge Folk Club:

The photo of Tara was taken by Paul Stuart.