This weekend has seen the celebrations of Cambridge Folk Club’s 50th anniversary. And a very fine weekend it has been.

Back in 1965 the Folk Club got off to an inspired start by inviting a young Paul Simon to play, just as he was releasing his first single, I am a rock. Since then many of the greats of the folk world have graced the stage, including Show of Hands, Ralph McTell, Dick Gaughan and Martin Carthy. And of course the club has always had close connections with the Cambridge Folk Festival.

However, alongside its national and international guests the club has above all supported local musicians and they were the focus of the weekend’s celebrations. The Friday night (May 29) got things off to a remarkable start with the Inspiration session, where 10 local songwriters – Tom Conway, Liz Cotton, Paul Goodwin, Kevin Hunt, and Chris Newman, Tony Phillips, Lizzie J. Taylor, Red Velvet and Richard Wildman, and myself – each performed songs by artists who had influenced our own writing, together with our own songs that had resulted from that inspiration. I played Michael Chapman’s Postcards of Scarborough and my own Clarendon Road in the first half, and Jacques Brel’s The Devil (ça va) and Rue Mouffetard in the second half. Other people chose to cover Christy Moore, Nick Drake, Jake Thackray and Rory Gallagher. As Jim Schwabe from the club said when wrapping up the evening there was not a bad song all night – the quality of the music and the atmosphere through the evening made for one of the best live events I have seen in many years. 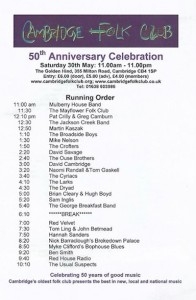 A marathon session on the Saturday (May 30) from 11am to well after 11pm saw 25 local bands and musicians take the stage and illustrate the broad swathe of music that the club chooses to call folk – from traditional songs through country, bluegrass, jazz, blues, rock and pop to covers of The Who!

We came during the afternoon – when there was already a packed house – and again in the evening where we were delighted to see our good friends Red House Radio (below) reform for a one-off gig after a break of three years, and were simply blown away by Myke Clifford’s Bophouse Blues. Again, the atmosphere was tremendous as people crammed into the upstairs room of the Golden Hind. 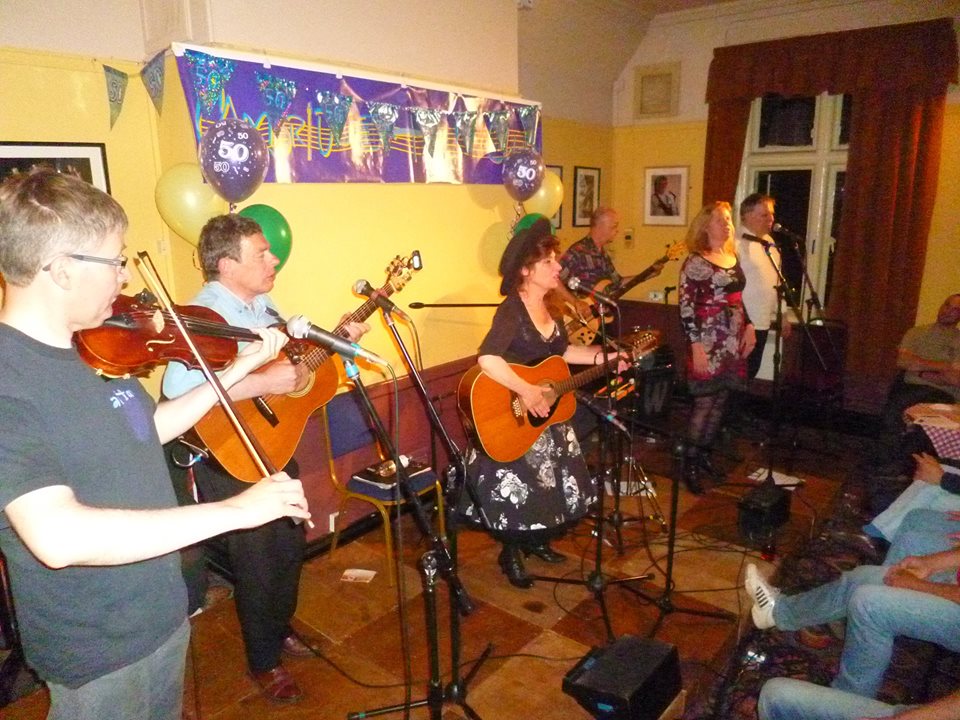 On a personal level, it has left me reflecting on the huge amount of support the club has given me since I got back into playing music seriously 15 years ago. As they have done with so many other people they nurtured me through the nerves, the inexperience and the false starts of those early days, and have continued to encourage me, even inviting me to support Waterson Carthy. My gigs there remain among the very best and most enjoyable that I play. But above all it is the warmth and friendliness of the club committee that make it one of the very best venues in the country. Thankyou all.